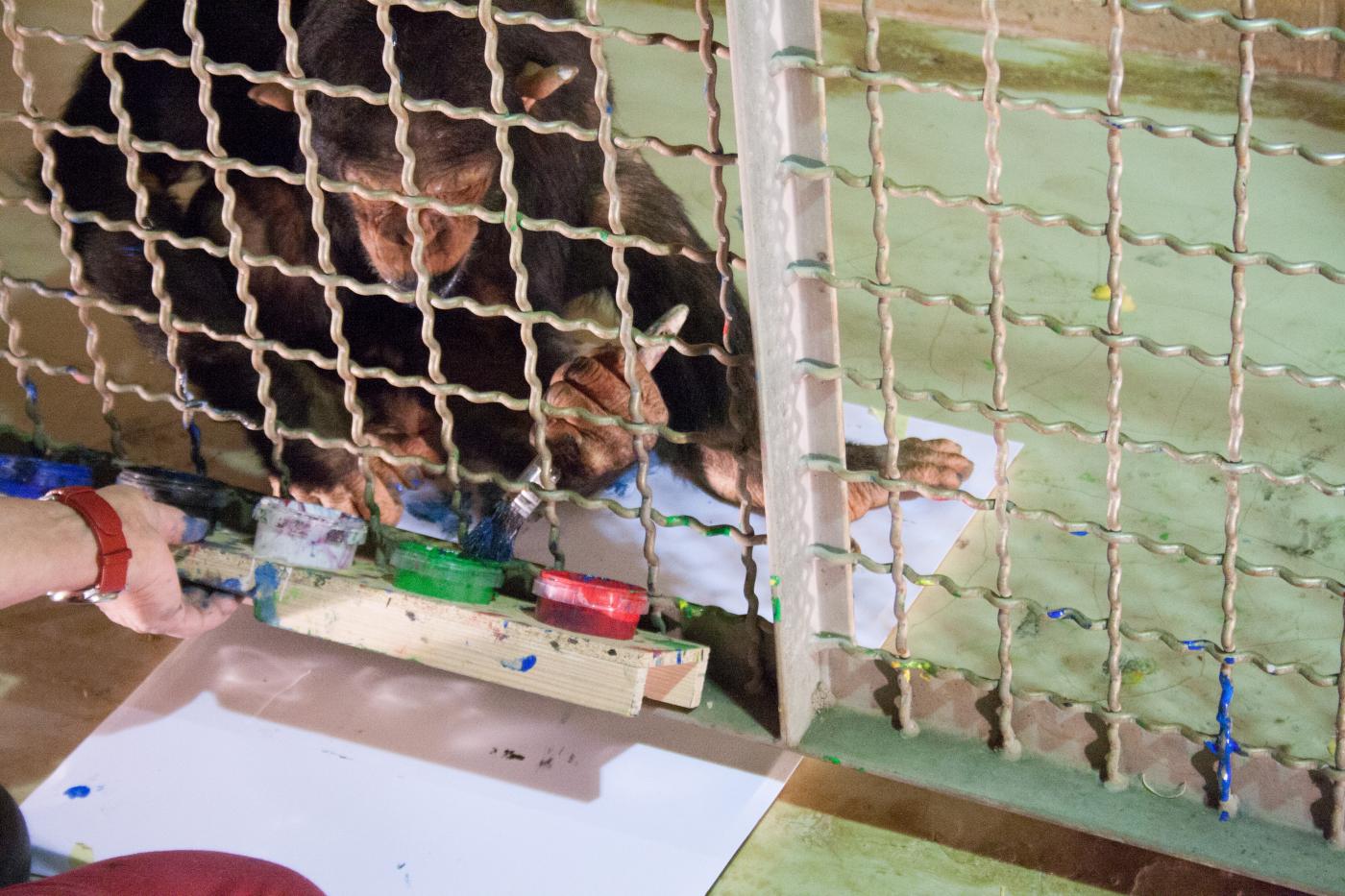 Digit, Balima, Madschabu scream and pound, then they all run away

Digit screams, the goes away again

Madschabu continues making strokes, and also uses his tongue and a piece of radish to paint
Blacky strokes a bit

Digit takes the brush and leaves

Chicca strokes on the enclosure grid
We slide the wooden board underneath the grid for the first time
Pili, Petiri are sitting in the front

Chicca strokes on the paper!

Pili is alone, takes a brush with paint on it into his mouth
Angela is stroking a few color dabs on the paper
He repeatedly takes the paint into his mouth
In between, he dips the brush into the paint

Pili is now just stroking on the paper!

He filled multiple sheets of paper and has even chosen the colors himself!

Petiri is distracting him
Mojo swings through

Pili is stippling also on the floor, then stipples on the paper again

Today the overall mood was pleasant and relaxed from the beginning. At first, there was a bit of shouting but this quickly settled. Madschabu joined in immediately and has begun with stroking. Blacky came a bit later, but only produced a few strokes. Madschabu was also not very motivated and stopped after about 10 minutes with stroking. He used his tongue several times and even a piece of radish to make strokes on the paper. We slid the wooden board underneath the grid for Chicca for the first time. She stroked calmly and relaxed on it and did not make any effort to rip off the sheet or take the wooden board inside the compound. She takes much more paint than Blacky and Madschabu and strokes smaller areas on the paper. As Chicca was not giving the brush back properly, she was sent away by Angela. Afterwards, Pili came and ate the paint. Angela made a few dabs of paint on the paper. Pili used the brush to dip into that dabs and then licked the paint off the brush. After that, he just started stippling on the paper and observed what he was producing right there! We are absolutely thrilled. Once again, we are curious to see how Pili will behave next time and whether he will remain as productive as Blacky, Chicca and Madschabu. Petiri distracted him all the time and wanted to remove the brush from his hands. We had to send him away several times and keep him in at distance. We are curious about whether he will do the same as his brother and will also start with the stroking or stippling.